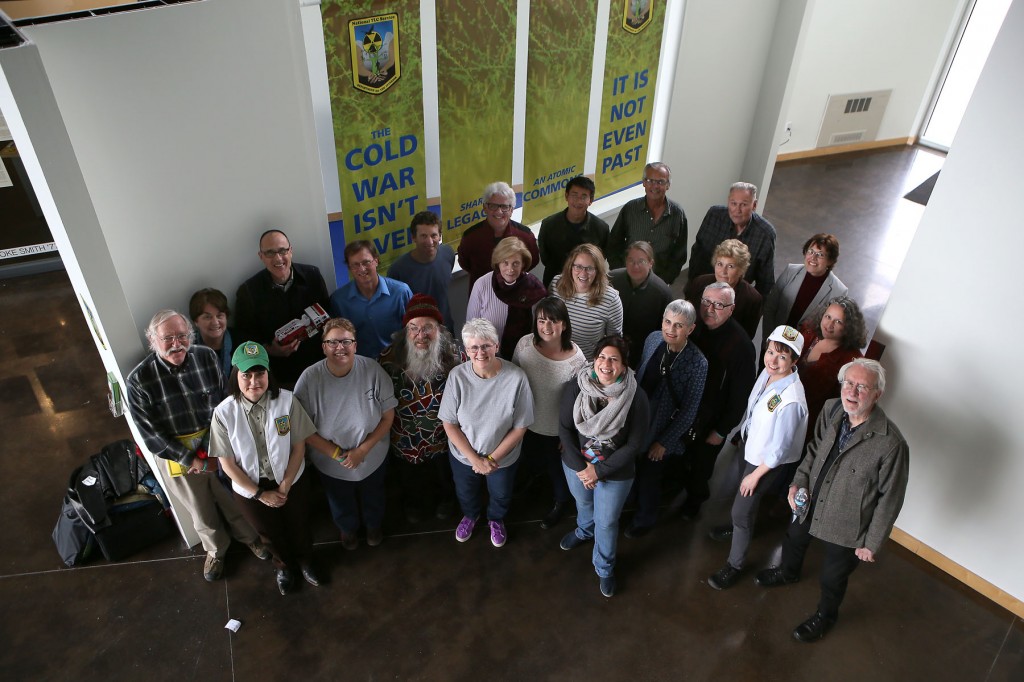 On March 19, 2016, the National TLC Service held a design charrette in Colorado Springs, CO, focused on developing experimental commemorations of the region’s ongoing Cold War legacy. The charrette was part of a collaborative Atomic Landscapes exhibition with the I.D.E.A. Space/Gallery at Colorado College.

For the exhibition, the National TLC Service set up a mobile field office in the I.D.E.A. Space/Gallery at Colorado College and invited audiences to think critically about Cold War militarism, contamination, and disease. Through its traveling office, the National TLC Service has conducted – and continues to conduct – research and grassroots outreach throughout the United States.

Along with its mobile field office, The National TLC Service design charrette aimed to infuse public discourses/cultural memories of the Cold War with local knowledges and multi-perspectival experiences. Through this exchange, the charrette also proposed the creation of an unofficial National Cold War Environmental Heritage Trail in Colorado and surrounding areas – (in)complete with markers of the War’s material and metaphorical processes. 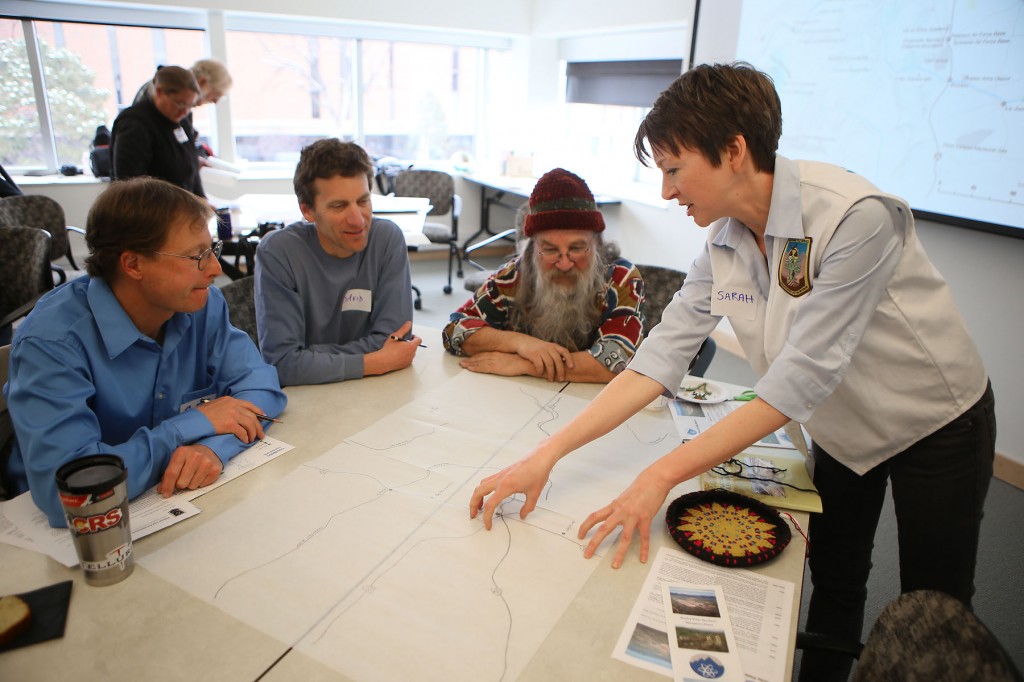 Moreover, attendees shared stories, sounds, actions, objects, symbols, gestures, and materials to (re)examine the complex – and often conflicting – representations of the Cold War. Through combined methods, participants developed potential trails and tours that would ultimately function as spatial narratives to “tell Cold War stories through place.” The event concluded with participants breaking into small groups and designing speculative monuments to reflect the Cold War’s toxic epistemologies/effects in Colorado and beyond. 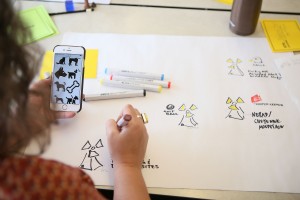 One charrette participant, Stephanie Malin, reflected on her group’s imaginary monument design: “Our monument was centered around windmills that would be constructed and designed by local community members and placed at each site.  These windmills would have the radioactive symbol as their turbine, which would remind people of [the nuclear] legacy at these places while also pointing forward to renewable alternatives in these same spaces.  We would encourage people to bike and walk around each site, and even have an eventual (long) trail connecting them. We wanted sound to be a key element at our sites, so we had the idea that each windmill would be rather large and have an internal space to display artifacts and present recorded oral histories related to the local site.”

Fritz and Barbara Pipkin proposed the construction of “a brass hand” structure “reaching out offering hope and remembrance” to those residents whose bodies were affected by the region’s chemical production. The imaginary landmark would hold “a ribbon with the words ‘supporting the fighters, admiring the survivors, honoring the taken, and never, ever giving up’.” 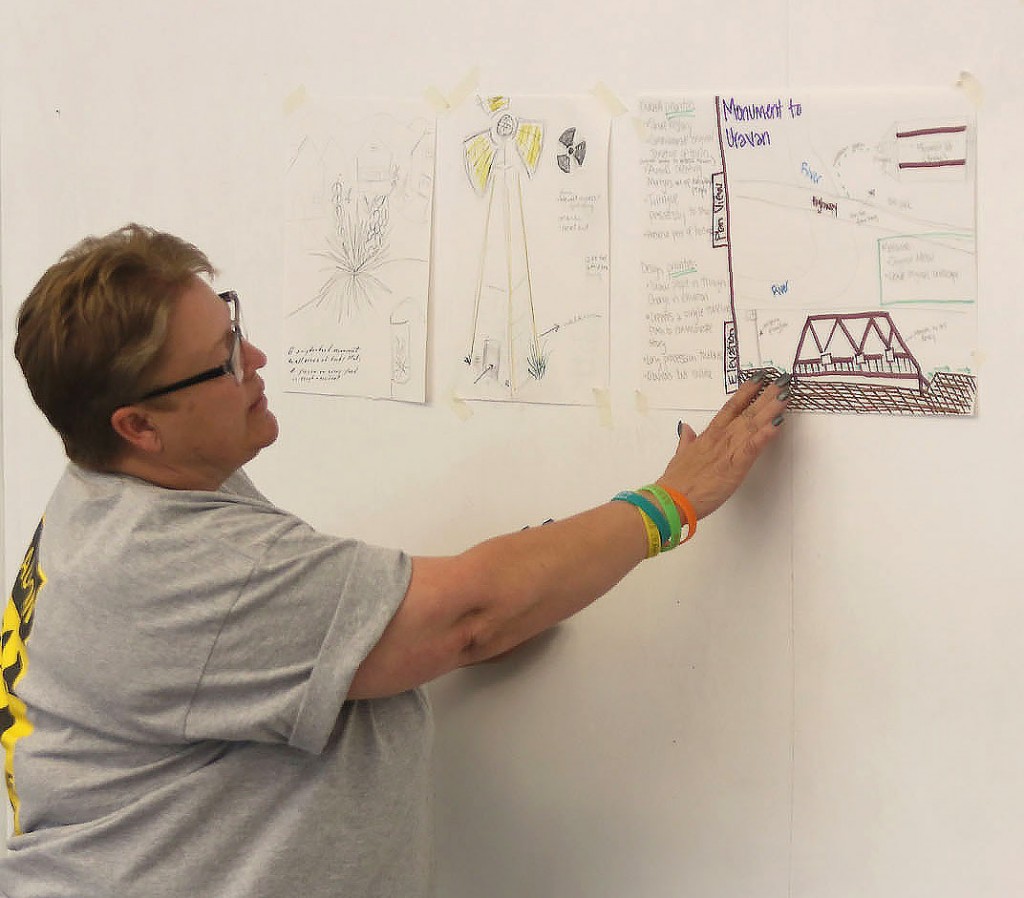 Other participants imagined a bridge-like structure to commemorate the former town of Uravan: “The bridge will be slightly sunken into the ground in order to physically draw visitors into the space. Additionally, the linear structure of a bridge allows for the history of Uravan to be easily told chronologically, with visitors emerging from the end into present day conditions.” 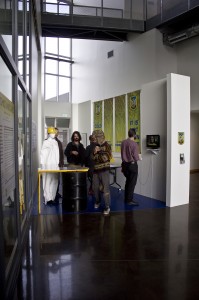 Curated by Jessica Hunter-Larsen and featuring artwork from Jeremy Bolen, Nina Elder, Eric LoPresti, Patrick Ryoichi Nagatani, and Claudia X. Valdes, Atomic Landscapes challenged audiences to think about the “dis-unified” cultures and epistemologies that emerged with the Atomic Age. Examining several nuclear hotspots in the American West and Southwest, the exhibition urged participants to question the ways in which nuclear history fuses into (or often evades) political, cultural, and personal narratives.