An Art Happening at Site A 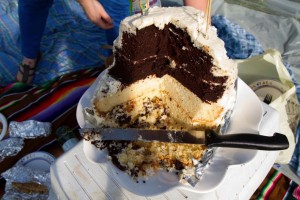 The National TLC Service has noted an increase in artistic interest in the atomic legacy over the last few years. Artists like Smudge explicitly link nuclear waste, its storage, and its movement with ideas about the Anthropocene. Others, such as Claudia X Valdes, explore the legacies of testing and its material and representational afterlives. At the Illinois design charrette for the National Cold War Monuments and Environmental Heritage Trail, the National TLC Service learned of a commemorative project by Alicia Chester and Amber Ginsburg that staged a picnic at the site where the first nuclear reactor is buried.

Chester and Ginsburg called the event a ‘happening,’ invoking the loosely scripted, experimental performances developed by Alan Kaprow in the 1960s. The artists created a 14′x14′ inflatable room and placed it on Site A in the Red Gate Woods just south of Chicago. The room’s simple, cubed form invoked the memorial marker at Plot M, the nearby location where the reactor’s waste is buried, collapsing the distance between the reactor and its waste. Invited guests joined the artists for a picnic inside the ghostly room, capped off with a layer cake in the form of the buried reactor. The artists write, “Through inviting friends to a communal event and sharing a cake in the form of CP-1, the event took on the flavor of a Day of the Dead picnic commemorating the life and death of the first nuclear chain reactor.” Careful attention to form, repetition, and the bridging of temporal and geographic distance mark this poetic intervention into Chicago’s nuclear history.